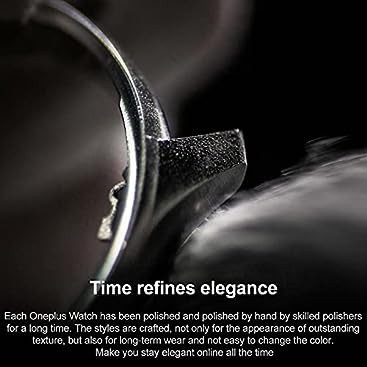 otleyoldboy
5,0 av 5 stjärnor Excellent smart watch
Granskad i Storbritannien den 9 oktober 2021
Verifierat köp
Don't understand some negative reviews for this watch. People should realise it's not a wear os watch.
Personally I'm not interested in replying to notifications on my watch as it irritates me. The watch is a excellent health/ fitness monitor. I find it extremely accurate & the sleep tracking good also.
The battery life is fantastic I've had it on my wrist for two days now & it's at 84 percent from full so I'm expecting at least a week.
The watch faces are not as plentiful as other brands but I'm happy with the choice. Syncs perfect with my OnePlus phone. All in all I love it!
As a footnote regarding the battery life I am getting six full days from the watch which I think is excellent. I have GPS & heart rate monitoring on all the time.
Läs mer
5 människor tyckte detta var till hjälp
Rapportera missbruk
Översätt omdöme till Svenska

Alexandru
5,0 av 5 stjärnor The best smartwatch that I had so far
Granskad i Storbritannien den 27 oktober 2021
Verifierat köp
I have bought the OnePlus watch following a terrible experience with a Fossil gen 5 smartwatch. Reading all the bad reviews about this watch's app, I was very reluctant wether to buy it. My first impression is that yes, the OnePlus app is not very rich in content and can do with slight alerations and addition of apps. But Wear OS is horrible too, and utterly inefficient. Below I add a small comparison between the OneplusWatch and the Fossil gen 5 with Wear OS:

1. Battery: I was literally stunned to notice how fast the OnePlus watch's battery charges. It is simply crazy. The watch does not heat up either and in less than half an hour it's full. Way less than half an hour. After half a day with some GPS outdoor walk, numerous SpO2 measurements, much play with the screen and apps, the battery dropped to 93%. I literally cannot believe this after having the Fossil watch, which at this step was at its last 5% charge. On that topic, Fossil took about 1:30 hours to charge, warmed up greately during the process and, once charged, it would start plunging right away.

2. Apps: compared to wear OS, OP does not allow third party apps. But let's be honest, do you really need a pocket calculator on your watch? I could never type well enough on the small screen. Maybe if you want integration with Strava etc., here OP looses. But apart that, Wear OS apps usually are not free and are rudimentary (such as Sleep as Android) which depletes about 50% watch battery overnight and 20% phone's battery. Apart from that, I do not miss too many apps on my new OP watch, which tracks sleep, health metrics, has notifications, allows calls from the watch. I really don't do much less on the OP than on the Fossil. On this point, OP's sleep metrics are deluxe compared to Google Fit's sleep: OP detects sleep fast and accurate and does not consume battery. Wear OS has >100 background processes inherited from its big brother, Android, which make the watch slower and consume so much battery. OP cut to the point with its RTOS, which does only what it needs.

3. Navigation: OP has a too rudimentary app which requires the phone to be connected to Google Maps and to be navigating on the phone at the same time, so not really useful. Wear OS has maps and outdoor apps such as Viewranger compatibility, which is great...on paper. Buy a 250£ Wear OS watch and you will notice that if using Maps with screen and GPS ON, you will have like 2 hours of battery from 100% to flat. Very good investment indeed...

4. NFC pay is (not) a real loss on OP. OP does not yet support it, but Wear OS devices do. There is a catch with Wear OS' NFC payment system which no one seems to mention. Like on the phone, in order to use it, you need to enable screen lock on the watch. Not only when you want to pay something, but always. But the watch has no face or fingerprint recognition. So you enable NFC Pay and the screen lock with the only option: the pin. Now imagine you are running and sweaty and you want to change the tune on the watch. Good luck inputting the pin.

5. Screen: OP's screen is better in all ways compared to Fossil. And the ambient light sensor works on it compared to Fossil's. Also on the Wear OS, bright screen was a luxury when the battery was depleting so fast, it's no longer an issue on OP.

Overall, OP has less apps, but Wear OS' terrible battery management makes the advantage of Play apps useless. There is no purpose in having many (useless) apps if they cut through the battery's life. In my opinion, a smart watch should balance battery life with apps. Trust me, it is horrible to go to the office with a full battery and return home with a dead watch. Here is where OnePlus wins, its battery lasts much longer than any Wear OS device on market, making its use more comfortable, while it still packs the really useful multimedia and health tracking apps.

Later edit: the battery lasts about 10 days under quite intense use (always ON screen not turned on).
Läs mer
3 människor tyckte detta var till hjälp
Rapportera missbruk
Översätt omdöme till Svenska

Joel
5,0 av 5 stjärnor Good value
Granskad i Storbritannien den 13 augusti 2021
Verifierat köp
For the price this watch is amazing, quality feel and looks good. Lacking certain features but if you haven't had a smart watch before I you will not miss them in any way shape or form. Good UI, easy to use and good value. Battery lasts approx 3-4 days with all features active and will do 8-10 days if you turn certain things off like the always on display and constant heart rate monitoring etc.
Läs mer
5 människor tyckte detta var till hjälp
Rapportera missbruk
Översätt omdöme till Svenska
Se alla recensioner
Tillbaka till toppen
Lär känna oss
Följ oss på
Tjäna pengar med Amazon
Låt oss hjälpa till
© 1996-2021, Amazon.com, Inc. och dess närstående fӧretag