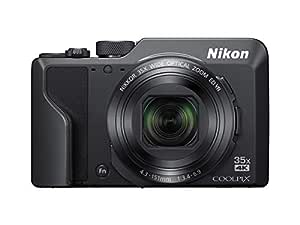 Christopher D. Yates
5,0 av 5 stjärnor A very high grade compact
Granskad i Storbritannien den 3 april 2019
Färg: SvartVerifierat köp
A very nice camera. Slightly larger than I expected, and a bit heavy (well built is how I regard it).
Not a problem as it easily fits in a pocket.
As I am used to the SLRs the menu system was a little confusing at first, but then I realised that the menu options were specific to the selected mode, so only relevant options show. Nice.
I bought this specifically for PSAM and Raw capability and am not disappointed. These modes work well (so far) and I was delighted to find that the flash operates in the same way as on the professional SLRs, you want flash, you release the flash unit, no auto flash here, so no irritation trying to disable it for low light shots (which the camera is very good for).
More that a "point and shoot", this is what I regard as an "opportunity" camera, when something shows up that deserves shooting, it is ideal, either out walking around the countryside with no specific pictures planned, or when the SLR is carefully set up for something and I do not fancy reorganising for a chance shot.
The scene modes automatically set the camera to JPEG, a slight negative perhaps, but I do not expect to use them all that often, as the adjustments they apply can easily be done later on the computer (picture controls and such).
Sensor size (and so field of view) is about 1/4 that of DX format.
No GN information for the flash, but it seems to be on a par with the pop up flash of the SLR range (no CLS though, if you want that then look elsewhere, although SU4 mode flash guns probably work).
I would say that this is an ideal camera for anyone wanting a back up to one of the higher end SLRs, or for someone upgrading from the lower end compacts and wanting to get into the serious end of fine control over exposure without the expense of an SLR system.
Someone once said that the best photographs come from the camera you actually use (no camera, no picture). The
convenience of this one means I expect to use it a lot.

Mr B Phillips
4,0 av 5 stjärnor Compact and Capable
Granskad i Storbritannien den 1 maj 2019
Färg: SvartVerifierat köp
A further refinement on the compact for interested users. Although the pixel count is slightly reduced from the 900, this update provides a viewfinder - ideal for some image situations. It is portable enough to be carried everywhere and powerful enough to be just right as an ever ready for the interested photographer.
A good combination of high quality image capture plus the long reach of a hq zoom in a compact package. Good control and great functionality makes this a good choice for most photography needs
Läs mer
5 människor tyckte detta var till hjälp
Rapportera missbruk
Översätt omdöme till Svenska

Peter
3,0 av 5 stjärnor Disappointed, wish it had gps fitted.
Granskad i Storbritannien den 22 juli 2020
Färg: SvartVerifierat köp
Bought this camera to replace a Panasonic LUMIX which I foolishly dropped, it does similar to the LUMIX but I don’t think the results are as good, my biggest problem is that I like to geotag my photos and the LUMIX with it’s built in gps did this very well, unfortunately the Nikon, along with most other new cameras no longer have gps, relying instead on linking to my phone, the link was not easy to set up and proved to be very unreliable, spoiling photos from a couple of nice days out, the Nikon overall disappointed me so much that when I recently discovered the Olympus ‘tough‘ compact camera actually does have built in gps I replaced the Nikon with it after only a couple of months use.
Läs mer
Rapportera missbruk
Översätt omdöme till Svenska

Malcolm D
3,0 av 5 stjärnor No depth of field
Granskad i Storbritannien den 10 februari 2020
Färg: SvartVerifierat köp
I was quite disappointed with this camera. Being a Nikon, I was expecting more. The build quality is good, mainly metal. It has lots of features. I loved the view finder. It was crystal clear and great focus, thanks to the diopter adjustment. But the actual pictures are not as good as what you see in the viewfinder. My main concern is depth of field. I tried on auto, portrait, and aperture priority with a large aperture. But pictures looked flat. In fact after experimenting, I realised that pictures taken with my iPhone SE were better. Sadly, I have just returned the camera to Amazon. Very disillusioned.
Läs mer
En person tyckte detta var till hjälp
Rapportera missbruk
Översätt omdöme till Svenska
Se alla recensioner
Få snabb, gratis leverans med Amazon Prime
Prime-medlemmar har GRATIS tvådagarsleverans och exklusiv tillgång till musik, filmer, TV-program, originalljudserier och Kindle-böcker.
> Kom igång
Tillbaka till toppen
Lär känna oss
Följ oss på
Tjäna pengar med Amazon
Låt oss hjälpa till
© 1996-2021, Amazon.com, Inc. och dess närstående fӧretag