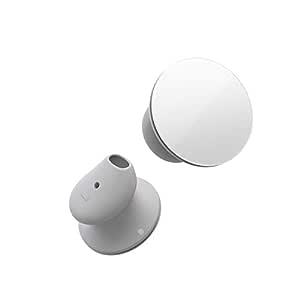 Augustus
1,0 av 5 stjärnor A let down
Granskad i Storbritannien den 29 juni 2020
Stil: HörlurarVerifierat köp
These are a promising set of earphones, but a real let down in practice.

Look unique, the fit is nice and airy.

1) They don't have multipoint control (which is quite misleading, as Microsoft advertises that it can connect to multiple devices, but they just neglect to mention not at the same time - which means you can't have them connected to your PC for Zoom / Teams call, and then use them for a phone call when someone rings on your mobile.

2) They emit an infuriating hissing noise for ~3 seconds in the left earbud, every now and then. When I Googled "Microsoft Surface Earbuds hissing", I found out it is a common issue that Microsoft has aknowledged but not fixed.

3) Audio delay. Watching simple YouTube videos is infuriating, as there is a lag between the video and audio. This is on a Microsoft Surface Pro 6 (i.e. it should be fully compatible).

I will be returning these, after less than 1 hour of trying them out. Don't waste your money, unless and until Microsoft addresses these issues (Google it first - they have been outstanding for over a month now, and no fix...).
Läs mer
26 människor tyckte detta var till hjälp
Rapportera missbruk
Översätt omdöme till Svenska

I've been using it for last 10 days extensively and I must say - it is great headphones, great build, radial controls makes the control over noise cancellation and sound more intuitive. Multipoint connection is great feature

The only annoyance I've got is the way Mute button works during the meeting:
Once pressed, all sounds are muted for few seconds, until voice will say that you are muted, so you may miss important bits your collegues talking during you mete

The better way to implement mute button I've seen is to just do the beep sound indicating you went on mute and that should be mixed with the sound from the meeting.

However I hope it is just a software problem and can be fixed in future updates, so it may become 5-star review.
Läs mer
5 människor tyckte detta var till hjälp
Rapportera missbruk
Översätt omdöme till Svenska

Bob Churchill
4,0 av 5 stjärnor Comfortable headset with good controls but the NC not all it's cracked up to be
Granskad i Storbritannien den 19 augusti 2020
Stil: hörlurarVerifierat köp
This is a comfortable pair of headphones. Using the volume control by twisting the right ear is great, and being able to tap anywhere on the touch-sensitive ear is intuitive. However, it occasionally goes off if lying or reclining in the headset, pausing your audio with a beep.

Having the voice of the headphones tell you what it's connected to is useful, as is the battery remaining report. However, I've found its estimations vary widely. It can start at something like 18 hours, but within an hour will tell you there's 6 hours left or something, which rather ruins the point.

Unlike other bluetooth headphones I've used, these connect nicely to both my phone and laptop without me having to tell it which to connect to when both are on, and it simply switches to whichever device I want sound on without having to re-connect in the bluetooth controls, so that's good.

The NC controls aren't great either: like the volume you twist the (left) ear piece, which supposedly allows you to control them from amplifying sound, through "pass through" sound, then dialling up the NC. But the degrees of turn between NC on and NC at maximum are few, which would make it hard to really tune it to any degree. But the difference between "on" and "at maximum" is almost imperceptible anyway.

Also, the pass-through sound is digitally enhanced; it doesn't just turn off the NC but takes the external sound and plays it through the earphones. I guess this is intended to compensate for the fact that the earpiece itself is blocking out some of that external noise. But the result is a slightly weird, processed version of the outside noise. I'd rather at least have the option of just turning the audio intervention off, which can also help to preserve battery. But that doesn't seem possible here: the audio intervention is always active, either cancelling, "passing through", or amplifying. There's no button or position on the dial that simply turns off all audio intervention.

Overall, if you really want a touch-to-pause function, and a nice intuitive volume control by spinning the earpiece, then they may be worth it. But you can probably find cheaper headphones for noise-cancellation that block out just as much noise without effectively paying extra for the touch-sensitive gimmick. And the dodgy estimates of battery life leave a lot to be desired.
Läs mer
En person tyckte detta var till hjälp
Rapportera missbruk
Översätt omdöme till Svenska

Steve R
5,0 av 5 stjärnor Easy control and multiple Bluetooth connectivity
Granskad i Storbritannien den 4 oktober 2020
Stil: hörlurarVerifierat köp
If I am honest these are only the second best headphones I have owned in terms of sound quality but in every other aspect the best. Comfort is good enough but the stand out is the multiple device connection and the features on the ear pieces. Answering or rejection of calls is simple, noise cancellation and volume control is second to none via the ear pieces and battery life is very good haven't used my Sony's since. Price is also very good. Unless you are an audiophile the compromise is well with it
Läs mer
En person tyckte detta var till hjälp
Rapportera missbruk
Översätt omdöme till Svenska
Se alla recensioner
Tillbaka till toppen
Lär känna oss
Följ oss på
Tjäna pengar med Amazon
Låt oss hjälpa till
© 1996-2021, Amazon.com, Inc. och dess närstående fӧretag