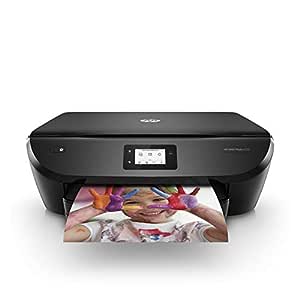 007apb
5,0 av 5 stjärnor Fantastic Printer!!!!
Granskad i Storbritannien den 12 maj 2018
Storlek: 10 Seiten/Min + SW-TouchscreenStil: skrivareVerifierat köp
At last a printer that actually works when you need it. Sick of my last printer always asking for new ink which was costing a fortune. With this printer, the quality is great and when new ink is needed HP sends it to me ahead of time. I’ve subscribed to 100 prints a month for £3.50 which is reasonable, plus unused pages roll over. If you would like a free month of printing use this referral code: mpLsp
Läs mer
379 människor tyckte detta var till hjälp
Rapportera missbruk
Översätt omdöme till Svenska

sickle
1,0 av 5 stjärnor Trash. Poor android software, poor windows software, poor documentation, buggy product.
Granskad i Storbritannien den 17 augusti 2020
Storlek: 7 Seiten/MinStil: skrivareVerifierat köp
You know those frustrating experiences where nothing works as intended?
And you spend all day trying to do a 2 minute print.
That's what you're in for

The instruction leaflet has about 10 pictures, and attempts to be "smart" enough to set everything else up automatically.

First up you need to use their app, because hey, no USB cable. We're doing this on wifi.

It's not at all obvious when the printer is ready or on the wifi.
It randomly prints status sheets
The power cable is loose.

So you install the app and finally get the printer identified.
It prints out a calibration page which you're meant to scan... cool idea.
Few smudges, but it's a start.

So let's skip this.

Right next to the router btw, nothing else on the same channel, no issues getting an IP.

So, remove the printer from the app... go to add a new one.
"Make sure it's on the wifi"

How can I get it on the wifi if I need to set it up?
Little wifi button... nada.

Try adding a new one
"My printer is not listed" (since it can't find it)
So "select your printer type".
It lists every HP model in the last 10 years but hey, not the 6000 series!
Trash.

HP's support doc "c06557114" in the URL suggests connecting directly to the printer, but the pin on the back doesn't work, the password is incorrect.

Let's try setup mode from the HP app, after holding the wifi button again for 3 seconds...
Nope, no printer.

WiFi direct printers? Nope, not there.

The HP virtual agent only has support info for Windows and Mac.
Where's all the app stuff suddenly?
The connectivity page doesnt run you through *re* connecting to the printer.

Okay, let's try a USB cable and the PC software.
117mb... stuck at 5% for several minutes.
"Unable to download the software package"
Why?

They've tried so hard to make it illiterate-proof, that it's a buggy, unintuitive mess.

Absolutely pathetic attempt on HP's part, and it should be a point of shame.

On top of that, the build quality is super questionable.
-little levers to lock down the ink cartridges, they'll snap soon
-power cable wiggles itsself out, even after ramming it in firmly
-there's flimsy plastic adjustment controls underneath that are already bent

Eventually I hold the wifi button for the 5th time
And the scanner finds the printer. Timing is key? It doesn't seem to *stay* in setup mode for more than a second or two.

It finds the printer, guides me back through the setup...

"ENJOY HP ACCOUNT BENEFITS"
but... the status bar is still spinning on the app?
Who wrote this trash? Am I waiting or not?
I Skip it, because this thing's getting returned...
"checking printer status"
"skip alignment" since that doesn't work
And now i'm being advertised to? Buy ink? Seriously?

Finally I get to the scan page.
There's no progress a such.
It finishes, plays a jingle (yes it's musical, like a child's toy)
I have to press "save" multiple times...
And the quality is unacceptable. 300dpi max.
Covered in bit rot. Not usable in any way.
Worse than a picture from a 2010-era sony phone

What would be nice:
-Plug it in, USB, RJ45, etc
-"tell the printer which network to use"
-printer has an obvious wifi icon, that works.
-unplug, done.

And the icing on the cake.
The print quality is terrible too.
Läs mer
149 människor tyckte detta var till hjälp
Rapportera missbruk
Översätt omdöme till Svenska