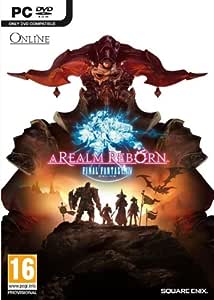 Final Fantasy 14 is a subscription game, you will be required to pay a monthly subscription as well as purchasing the game in order to play

You may need a UK Square Enix account in order to register this game.

Immerse yourself in a new FINAL FANTASY world.

FINAL FANTASY XIV, a multi-platform, multi-region MMORPG, is the next, major epic from Square Enix. Available for both PlayStation 3 and Windows PC, the title promises to be a watershed in user-friendliness and community diversification. Join players from around the world in an adventure of infinite possibilities.

Embark on the myriad journeys of an epic in FINAL FANTASY XIV, the revolutionary MMORPG from Square Enix. As denizens of the new and visually stunning realm of Eorzea, players will actively engage in compelling storylines narrated through high-definition, real-time events featuring the players own highly personalised and versatile characters.

While exploring even the farthest reaches of this magnificent world, adventurers are given the freedom to entirely alter their gameplay experience by simply swapping out equipment, and realise objectives with or without the aid of others. The entire experience is crafted to accommodate the widest variety of play stylesfrom the lone mercenary with only moments a day to spare, to the legion of comrades campaigning for days on end, and every combination in between.

Bryan A.
5,0 av 5 stjärnor Loving it
Granskad i Storbritannien den 10 september 2013
Verifierat köp
Following the usual launch fiasco for MMORPGs - in this case, they underestimated the demand and the server is overloaded - it's beginning to settle down after a big maintenance. The content is excellent, something of a melting pot of good things which have come to pass in MMORPG in nearly 2 decades, combined with the story-driven nature of this franchise.

It feels a bit slow to begin with, in terms of simplicity of questing and combat. Both the story and combat system pick up pace as you progress though, and I'd say it began to take shape and accelerate for me from around lvl 15-20. Till then it seems the devs assumed there will be new comers to MMORPG (especially on console end) and designed a gentle learning curve to ensure nobody is lost.

A lot of future MMORPGs seems to be going towards action-based battle system. FF14 is still the slower paced, turn-like (for the lack of a better term) battle which I have to say I prefer. This is a much debated area of MMOs as it's subjective, so it may not be to everybody's liking. It's a great system for those of us who like this sort though.

The world and character design is comforting. I can't put a finger on why. Maybe it's the pretty characters, or distinct art form of the landscape, or level design. Either way it's a cosy world to reside in. It feels like I've known it for years and everything just seems to 'fit in'.

The music is worth it too. I brought down the voice, ambient sound and sound effect to "30" in settings, leaving music at 100. That seems to strike the balance for me. Usually I turn down (or even turn off) the music in MMOs after listening to each piece for a while, but I feel differently with this one.

It actually has a proper melody all the way, what one might call a melody-driven "contrapuntal" music (in a modern way). It's not your typical abstract "atomospheric" music based on a 10 second tune rearranged into a 15-minute drivel we've become accustomed to. Not sure why modern day game music has come to that, maybe today's composers in this part of the world have too little capacity for lyrical tunes? or have too little inspiration for imagining counterpoint to a melody? or just not enough time? Maybe they just write music from experimental chord progressions, and a melody follows as an after-thought? Whatever the reason, there is a clear difference with FF14, more akin to skillfully composed 8bit and 16bit era in terms of the compositional technique.

Its visuals are very pretty with max graphics too. Apparently devs pointed out that they made an effort to include players with older systems. So I tried to run this on lowest setting (also locked at 30 fps in the config) on a few lower end PCs I own.

On Core 2 Duo 2.33 with Radeon HD 6670 it's just playable, if only just. On a i5 2.40 laptop with Radeon HD 6470M, it's actually better which surprises me. Framerate does move a bit at times but playable around 25-30 fps, which is pretty remarkable on that mobile GFX chip. Maybe the CPU is the bottleneck (as if I'm surprised) with the first system. Or maybe they utilised hyperthreading well or something. Speculative, but i3 with worse gfx card may perform better than C2D with a better gfx card. Still nicer to have a better setup, but it's a nice touch that they tried.

In the end, once it all settles down for good - servers and all - and people give it a proper go (as opposed to marking it down out of frustration due to server issues which I can understand) I have an inkling this may very well go on to become a long-time hit. For the first time since the first EverQuest, I can truly say I have found a new MMO home in FFXIV:ARR.

I have now tested more low end combinations and can confirm that going from Core 2 Duo (despite the official minimum requirement) to i3 is key to stabilizing the framerate on 8GB DDR3 system. With HD7870 and i3 3.30GHz (although a strange combination) I was able to max out graphics and get stable 30fps (it goes higher into 50s but couldn't get constant 60fps) and gameplay is extremely pleasant with the eye candy and all.

The point is, if you're still on i3, you can get away with just upgrading the vid card. No need for a system overhaul.

Mr. Kyle S. Donnelly
5,0 av 5 stjärnor good MMO
Granskad i Storbritannien den 12 november 2016
Verifierat köp
The Realm Reborn was the answer to SE's horrible first time release of FFXIV. Also an answer to SE's mildly popular FFXI. A great MMORPG with a diverse realm of tasks and options. Great range of jobs to play us. Fun and interesting cities to explore. Just an all round great game.

Brilliant graphics and actually quite challenging. Most shocking of all fantastic music unlike the last MMO they attempted.

I will say that the screen is a bit flooded with information from every corner. Could use a clean up somehow. Still great fun and gameplay.
Läs mer
Rapportera missbruk
Översätt omdöme till Svenska

Diablo13
5,0 av 5 stjärnor Really great fun online RPG
Granskad i Storbritannien den 29 november 2013
Verifierat köp
Its a shame that Amazon forgot to deliver my pre-order on time, for me to take advantage of the pre-release game time I had earned from being a beta tester on this!
Still it is a great game with loads to do and characters to develop and I have to say it is without any doubt my favourite game of all time!
Great graphics, really good music, colourful characters compelling storyline and very addictive qualities which ticks all my boxes for gaming pleasure.
It had a bit of a rough start because it outsold all expectations, so many people couldn't get on the servers to play. That obstacle was soon over though and now there is no problem getting on when you want for as long as you want. It is making me avoid my bed like it had the plague, for as long as I possibly can.
Läs mer
En person tyckte detta var till hjälp
Rapportera missbruk
Översätt omdöme till Svenska

Pedro
5,0 av 5 stjärnor Amazing!
Granskad i Storbritannien den 3 september 2013
Verifierat köp
The game is graphically pleasing, the stories and quests are great, combing one character to play different classes which is how you create jobs, just wow! The game is huge, dungeons are great and challenging for the high end gamer and let me tell you they are not forgiving either :).

Very impressed with the design, story and does not disappoint.

Update happening increasing capacity on EU servers and adding new ones - so problem solved. Shows you how well this product is supported and as a inconvenience they are providing early signed up players to 7 days free game time I heard. Impressed!

What am amazing game, great starting video and cut scenes!

Kristia W.
4,0 av 5 stjärnor I never intended to play, this, but...
Granskad i Storbritannien den 12 maj 2014
Verifierat köp
I played FFXI, and after the way they handled things towards the end, I never intended to play this. After being begged by a good friend to play,I caved and agreed to at least try it.
It's a complete change from FFXI! I actually enjoyed my time on FFXI, but I know it wasn't for everyone.
This is much much easier to play, but not really in a bad way. The storylines that I've seen so far have been pretty well done, and fit with the Final Fantasy series pretty well. The crafting is really interesting, and well done. It's nice to see a game change it up a little in that aspect.
All in all, this is a great MMO for those who want to seriously play, and also those who wants something a little more laid back. Just don't expect something like FFXI, and you'll almost guaranteedly have a good time, whether you play solo or with friends.
Läs mer
En person tyckte detta var till hjälp
Rapportera missbruk
Översätt omdöme till Svenska
Se alla recensioner
Tillbaka till toppen
Lär känna oss
Följ oss på
Tjäna pengar med Amazon
Låt oss hjälpa till
© 1996-2021, Amazon.com, Inc. och dess närstående fӧretag