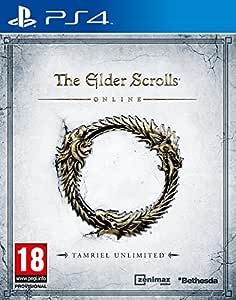 PLEASE NOTE: This game is online only and requires a PSN Subscription to play.

After 20 years of best-selling, award-winning fantasy role-playing games, the Elder Scrolls series goes online. Experience this multiplayer roleplaying game on your own or together with your friends, guild mates, and thousands of alliance members. Explore dangerous caves and dungeons in Skyrim, or craft quality goods to sell in the city of Daggerfall. Embark upon adventurous quests across Tamriel and engage in massive player versus player battles, or spend your days at the nearest fishing hole or reading one of many books of lore. Use any weapon or armor at any time and customize your abilities to play the way you want. The choices are yours and the decisions you make will shape your destiny and the persistent world of The Elder Scrolls Online Tamriel Unlimited.

The Elder Scrolls Online is set roughly 1,000 years before the events in The Elder Scrolls V: Skyrim and the coming of the Dragonborn, and just before the rise of Tiber Septim, the first Emperor of Tamriel. Three Alliances have emerged across the continent, each struggling for supremacy over the land. As these great powers battle one another for control of the Imperial City and with it all of Tamriel darker forces are moving to destroy the world.

Morpheus
4,0 av 5 stjärnor One of the best MMORPGs on the PS4
Granskad i Storbritannien den 19 augusti 2016
Verifierat köp
I see a lot of people comparing ESO to Skyrim. It's an unfair comparison. ESO is an MMORPG (Massive Multiplayer ONLINE Role Playing Game) best played in third person whereas Skyrim is a single player RPG (with no online play) which is best played in first person. They're different games sharing the same lore. If you loved Skyrim there are no guarantees that you will like ESO. I started playing ESO because I wanted a change from the other MMORPGs I had been playing previously - World of Warcraft, Rift, Lord of The Rings Online, Tera, Age of Conan and many others. So I bought the PC version of ESO but soon got tired of the bots, cheats and gold spammers. So I tried Final Fantasy 14 for a while and it was good. Then I saw ESO was available on the PS4 so I decided to give it a try. I am currently at level 18 with my first character so I haven't reached the "end game" but I am loving it. The (European) server is well populated so there are always plenty of other players around to group up with. The graphics are good - Not cutting edge for the PS4 but good enough. The world is HUGE and there is plenty to do - crafting, questing etc. You can solo most of the content so you don't need to team up with other players if you don't want to. There is no monthly subscription. There are several DLCs available. The dev team release regular updates with more content and improvements. In the time I have played the game it has never crashed. I can see some people complaining about the size of the updates (the last one was 36Gb) but it's not like you have to download one every week so it's not a big deal.
So I would say definitely give this game a try if you're into MMORPGs but if you prefer single player first person RPG/adventure games then this might not be the game for you.

I'm a pretty novice gamer, but this game is amazing - it's one of those which truly stand apart from the others, so I think you can easily play this before or after (or without!) playing the others in the series (skyrim, morrowind, oblivion).

It's a real-time, online game, which means there's always lots of other gamers playing at the same time. That has its pros and cons. A sort of con is that you likely have to subscribe to get online access - I use a PS4 and had to become a Plus member to be able to log on (but then you get the option of 2 free games each month, and cheap deals etc, so that can be a good thing anyway) - and in relation to that the servers sometimes go offline for upgrades and maintenance and you can't access the game during those times. That's quite rare though, and I've found it to be relatively bug-free.

Because it's real-time you don't have a pause option, which can be frustrating - I find it's best to make sure you've got a few hours free before getting involved in any group events or fights.

It is incredibly interactive - you can join guilds, trade items, make friends, team up to take down bosses or complete trials, do one-to-one dueling...What I liked is that for the most part you can decide how interactive you want to be, and you can also decide the approach you want to take. Once you get up to a certain level it starts to become necessary to team up for fights, but there's always so many other players logged on that it's pretty easy to join a group or tag along.

Do you want to be a healer, a fighter, a thief? What race, gender, armour, weaponry...? And then, do you want to spend a lot of your time exploring Tamriel, crafting items, focusing on the main storyline and quests, or doing all the mini quests?

And that's before you consider all the add-ons that are available to buy. You can get special outfits, different mounts (do you want to ride a horse, or a bear?), pets. And you can also get access to extra dungeons, the thieves and assassin's guilds, Cyrodiil etc.

The fact that it's online means new things are being added pretty regularly too, and it just never gets boring. The graphics and effects are really good too - probably the only thing that would make me suggest playing the older games in the series first. I also play Skyrim, and have to admit the graphics on that do look a bit dated by comparison.

The only thing that I do miss from Skyrim, is the ability to have a home - you have pack space, which you can upgrade (essentially how many items you can carry), and you also have bank space, which again can be upgraded; but I find these always run out really quickly, and it would be nice if I could keep some of the collectibles or armour/weapons, and put them on display somewhere, rather than just selling them if they're not useful. But like I said, it's such a different game, that I find it quite hard to compare them!

LS
5,0 av 5 stjärnor The best game ever! ❤️
Granskad i Storbritannien den 1 juli 2019
Verifierat köp
If you don’t want to get addicted this is not for you ! It’s great that I’m only reviewing it after I’ve been playing it for 10 months ! Me and my husband bought it and we enjoy Tamriel together! (2x PS4s!) ESO has a great community of people from around the globe, very friendly! The graphics are beautiful! The story is very thought of and very intricate! You can play any way you want, solo, PvP, crafting, exploring, duelling! So much to do, you never get bored! The recent update Elsweyr is FANTASTIC!!! Love every bit of it!
Läs mer
En person tyckte detta var till hjälp
Rapportera missbruk
Översätt omdöme till Svenska

Amazon Customer
5,0 av 5 stjärnor Miles better than expected!
Granskad i Storbritannien den 20 juli 2016
Verifierat köp
Great game. I didn't like Morrowind or Skyrim so wasn't keen to get this game, but my friends said it was a bit different and better than those games. I was pleasantly surprised at how much I enjoyed this game. Bargain for the £15 I paid for it. Must have given a good 40 hours of entertainment. I played it mainly solo, but once a week played with friends for a few hours which was fun, but became unbalanced once we were all at differing character levels in the game.
Läs mer
En person tyckte detta var till hjälp
Rapportera missbruk
Översätt omdöme till Svenska

Alex G.
4,0 av 5 stjärnor give it a go
Granskad i Storbritannien den 31 januari 2016
Verifierat köp
I would recommend this game to anyone who enjoys rpg's theres allot of craft skills. A looking for group system (needs improving at veteranrank) an unusual guild trader system where guilds bid on a trader. You can join 5 guilds at any one time so dont worry if one guild dosnt get a trader odds are the rest of them have. Its an online only game but no compulsory subscription so if you have Internet on your console allready you may aswell buy this game its only cheap and has well over 100 hours playthrough time. And all NPCs are fully voice so if you want to rush level with a group or slow level on your own its up to you there a pros and cons to this game but if you come in expecting a 10/10 mmorpg or Elder scrolls game you will be disappointed. Expecting a hybrid between the two then you will love it
Läs mer
Rapportera missbruk
Översätt omdöme till Svenska
Se alla recensioner
Tillbaka till toppen
Lär känna oss
Följ oss på
Tjäna pengar med Amazon
Låt oss hjälpa till
© 1996-2021, Amazon.com, Inc. och dess närstående fӧretag