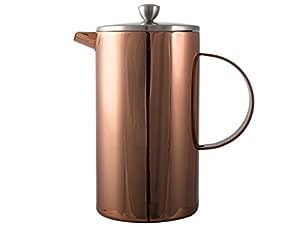 gfraser
5,0 av 5 stjärnor Bargain. Stunning. So much pleasure!
Granskad i Storbritannien den 28 november 2016
Färg: KopparVerifierat köp
I don't understand... why is this £12 and only has 2 reviews? This should have a "most popular" tag!

This is a great product, and is absolutely stunning, and a bit of a bargain.

I bought it as a replacement for a standard glass cafetiere, a Bodum I think, which got dropped and smashed. I chose it as I liked the price if I'm honest. I was geniunely pleased when I took it out the box. Initially, it's a lot heavier than you'd expect, and it looks really stylish to my eye.

It's made from a mix of stainless steels. The outer skin is a mildy ferritic, fairly average grade of stainless, electroplated to give it the copper finish. It looks great, and resists water marks and finger prints to some degree, although I can't resist giving it a final polish before it goes to the table or back in the glass cupboard anyway. The handle initially looked a little fragile (and is probably the failure mode if given some serious abuse), but appears to be tack-welded on properly (before plating, so it's nicely finished) and it easily supports this pot, which isn't exactly light. It's got some proper gravity to it, which adds to the quality feel. The lid and inner skin are non-magnetic, a slightly higher grade of steel, with a nice brushed finish. This finish seems only to be for aesthetics, as I can't see a practical reason for it. Due to the brushed finish, the scraping as you plunge the mesh filter is a bit "fingernails on blackboard" which you don't get with a glass cafetiere, but once it's full of liquid it's quiet. The shaft is chromed, and the filter mesh is very fine and works far better than my last Bodum.

It pours superbly, although for some reason I keep spilling a bit as I pour. I think it almost pours too well compared to my old bog-standard glass Bodum thing, so some brain recalibration is required. I also wondered if not being able to see the liquid as you pour is a factor, but it might just be the too-early-in-the-morning-and-I-haven't-had-any-coffee-yet effect. One feature of the insulated lid is that that first few drops you pour are just water; formed as vapour hits the cooler lid and condenses. This doesn't matter, just an observation. Anyway, it feels lovely when you're actually tipping it... heavy, sturdy, smooth flow to the pour. Who knew I'd get so much pleasure from a coffee pot!

The double-skin insualting effect works well, especially compared to a standard glass design. The lid, too, is insulated in the same way, which is nice. I grabbed an IR thermometer because... well, any excuse to use it really. With 90C water inside, the outer skin peaked at 39C in a room of ambient temp 23C. The pot was sat on a wooden table and not an efficient heat-sink, so a fair real-world test. The handle started a bit lower, but eventually equalised with the pot around 37C. It's just warm to the touch, quite comfortable, and no risk of burns. As a comparison, my coffee mug (which I used cold and did not pre-heat) was at 55C when the pot peaked at 39C. I assume a glass pot would be similar to the mug. A lower difference between the outer skin of the pot and the ambient air temperatures means heat dissipates more slowly, and the coffee stays hotter for longer. Take the numbers with a pinch of salt, because they're not accurate. The more important test is this: the second cup I poured myself was noticeably hotter than I'm used to with the old glass pot. This might not be the last word in vacuum-sealed insulation, but it absolutely works.

The filter assembly, which is the very standard 3-piece plate, filter mesh and springy-thingy, wouldn't unscrew by hand at first; it was on too tight to undo by hand, and I had to get some pliers to hold the shaft still to unlock the screw thread. Once cracked, it is perfectly fine. However, in my first attempt to undo it, I unwittingly held onto the top "knob" at the top end of the shaft (the bit you see at the top of the picture there). This knob is also tapped and screwed on to the threaded shaft, and in holding it I accidentally stripped a bit of thread on the knob. So, don't do that. A dab of loctite glue fixed mine, and all is well again, but if your filter assembly won't come apart out of the box, grab some pliers to hold the shaft, and don't hold the knob on top. Stick some tape around the chromed shaft before grabbing it with the pliers.

Another minor defect: the knob itself hasn't been turned on exactly the same axis that it has been drilled and tapped for the shaft. You'd never notice it by eye, but I noticed because I had it apart and was inspecting the manufacturing process. Honestly, unless you buy this for your engineering workshop team coffee breaks, nobody will care.

So, not perfect then, but it's still easily 5 stars, but still £12 feels like a mistake. Not that it couldn't be made for that, but compared to the rest of the La Cafetiere range, or similar from Bodum etc. It feels out of place in the product range. Bargain. Enjoy!
Läs mer
22 människor tyckte detta var till hjälp
Rapportera missbruk
Översätt omdöme till Svenska

Tactical Basement
5,0 av 5 stjärnor Very pleased
Granskad i Storbritannien den 31 juli 2018
Färg: KopparVerifierat köp
Only got it yesterday. ..and we are very happy with this bit of New kitchen ware..amazing price ! and all we could wish for.
Läs mer
2 människor tyckte detta var till hjälp
Rapportera missbruk
Översätt omdöme till Svenska

MRS NICOLA L COLLICOTT
1,0 av 5 stjärnor Poor quality
Granskad i Storbritannien den 16 januari 2021
Färg: KopparVerifierat köp
Very disappointed. After one use the copper finish is peeling off around the top. Returning for a refund.
Läs mer

1,0 av 5 stjärnor Poor quality
Granskad i Storbritannien den 16 januari 2021
Very disappointed. After one use the copper finish is peeling off around the top. Returning for a refund.
Bilder i den här recensionen